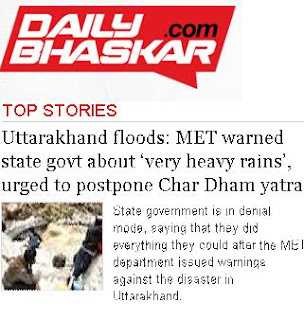 This is an old post. The paper has now been launched. Read the latest at this link: Dainik Bhaskar silently launches English daily DB Post

The Dainik Bhaskar group that has always harboured plans to own a major English newspaper, is now ready to start a daily.

The DB group didn't get the benefit out of DNA, the joint venture of Zee and Bhaskar. The top level hirings have begun and it is learnt that the Bhaskar media group aims at beginning this newspaper within the next few months.

Bhaskar was steadily moving ahead with its plans. The first indication came when they launched their English news website Dailybhaskar.com sometime ago.

Bhaskar has presence in half-a-dozen states and is a mass circulated Hindi daily. It owns Gujarat and Marathi newspapers under th title Divya Bhaskar.

In the eighties, Bhaskar had started a newspaper as English Bhaskar which was later renamed as National Mail. After running for more than a decade, National Mail was abruptly closed. But the Bhaskar toyed with the idea of acquiring an existing national newspaper.

The aim is now to get into the English market in order to acquire more clout, influence and seek joint advertisements for both languages. Its Hindi news website is considered miles ahead of other papers because of its saucy coverage and instant news alerts.

It has news from small towns also which other websites lack. Times of India, Hindustan Times, NDTV, IBN-Live, are some of the websites that have been running for long but there is adequate space for English news site that gets news from hundreds of cities in India.

If Bhaskar gets into English media, it can change the scene. With Lok Sabha elections next year, the Agarwals may be hoping that they would take off their newspaper soon. Already, the DNA editions which are under Bhaskar's control--like in Jaipur and Indore--could be used as regional editions.

UPDATE: Why DB POST failed to make a mark in Bhopal?
Posted by editor at 2:05 AM