The sensational gang rape of a girl student in Manipal in coastal Karnataka was solved as police arrested a Bajrang Dal leader and his two other associates for the crime. 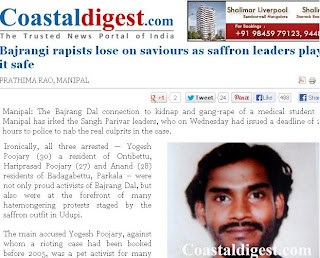 Just a day later, a Vishwa Hindu Parishad (VHP) leader was arrested for serial bomb blasts in Kosi Kalan in Mathura in Uttar Pradesh (UP).

Both were important reports but were largely ignored. Mainstream media didn't consider them worth reporting.

Even the English TV channels and newspapers that claim to be more inclusive and secular didn't deem it fit to give them the deserved space.

Is there any reason for being soft on the right-wing extremist groups who claim to be patriotic but are found involved in destructive activities. Manipal rape was a sensational crime for media earlier.

The condition of the victim who studied in the university remains critical. But after his arrest, despite his Bajrang Dal connections, TV channels refrained from naming the organisation. The gang rape accused Yogish alias Yogesh attempted to commit suicide after he realised that he would be caught.

His two other accomplices Hari Prasad and Anand were also arrested. The Bajrang Dal had made a hue and cry over the same incident in Udipi and had 'warned' administration that the culprits should be caught at the earliest.

In their demonstration, Yogesh's brother was also present. Ironically, the Saffron group had a volte-face when their own man was caught for the crime. Most newspapers didn't even write about the rapist being involved with Bajrang Dal.

Shockingly, Times of India published news when Bajrang Dal & VHP took out demonstration but didn't write a line on Sanghi links when the arrests were made. There were exceptions though like Coastal Digest that didn't try to hide the Bajrang Dal connection of the rapists. But the national media and other news organisations clearly played it down.

Sanghi link to bomb blasts in UP don't make news! 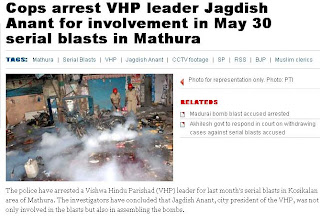 The second news came from Uttar Pradesh (UP). In this case also, the media almost blacked out the arrest of a senior VHP functionary.

This was also no ordinary case. Jagdish Anant was arrested for serial bomb blasts in Kosi Kalan.

Except Mail Today, which belongs to India Today group, no newspaper carried the report. There were complaints about the Hindutva link to the blasts but CCTV footages and evidences clearly nailed Anant. IT was in fact a 'terror case'.

Such cases media loves to play up. But this was not considered 'terrorism' and even not considered to be news worthy! Anant was even found involved in assembling these bombs. This is really a worrying situation where media groups and journalists stop reporting crimes committed by the Hindutva groups.

Is it sympathy for Rashtriya Swayamsevak Sangh RSS' sister organisations or their fear? What else could be the reason.
Posted by editor at 1:29 PM