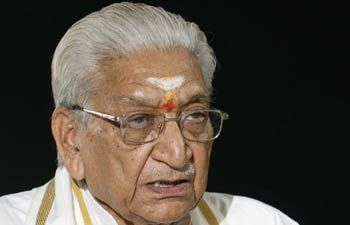 Business Standard has published an obituary of VHP's former president Ashok Singhal who died on Tuesday.

This obituary is a classic case of how Indian main stream journalism tries to suppress facts and ignores the 'crimes' of Hindutva hardliners.

This obituary titled, 'Hindutva warrior Ashok Singhal passes away', written by Archis Mohan never mentions for once the hate speeches by Singhal that vitiated communal atmosphere in India.

Neither does Mohan wrote a word about VHP getting banned after December 6, 1992 and about the case against Singhal in Babri Masjid demolition. As part of the first batch of Hindutva proponents, Singhal was an extremist who instilled persecution complex among the majority community.

The communal hatred which Singhal and his contemporaries spread, did incalculable harm to India, and affects its secular fabric. Perhaps, journalists whose hearts beats for Hindu rashtra, can write such an obituary that completely ignores Singhal's follies and his attempt to divide India on communal lines.

But Business Standard is not alone, other papers too ignored how Singhal had divided Indian public on communal lines and consistently targeted the minorities. Other English papers were equally soft towards Singhal.

Indian Express' Shyamlal Yadav wrote an equally one-sided obituary titled, 'The importance of being Ashok Singhal', and this report too has not a single mention of Singhal's hate speeches and his involvement in demolition of the Babri Masjid.

While Hindi papers mostly carried positive reports, this Business Standard tribute leaves is one of the most interesting cases of how biased and totally one-sided reports can be written in Indian media. Link to the Business Standard obituary.
Posted by editor at 11:16 AM