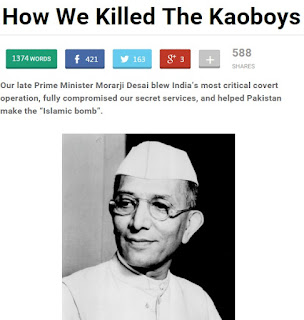 Swarajya magazine is quite clear about its editorial policy. The tagline is, 'Read India Right'. It claims to provide right response to the Nehruvian socialism. Fair enough.

There is definitely space for such voices but is 'Caste obsession', the answer to Nehruvian socialism?

EditIndia hasn't focused much on caste before, but this article on the magazine's website, which is being widely shared, made us sit up.

The article, 'How we killed the Kaoboys', tells the story of how Janata Party government led by the then PM Morarji Desai, had spoiled RAW plan to target Pakistan's nuclear programme.

This is a well-known story but it can be told again and again, no harm. However, the first few lines of the article set the tone for it. The eulogy for R&AW founder, comes in the second sentence. Now read this...

Kao is a name that’s known the world over—the secret world of espionage. R.N. Kao was the man anointed as independent India’s spymaster to bell the international cat. This shrewd, sharp and surprisingly shy Kashmiri Brahmin (Ramji to his friends; Kao to his foes; R.N stood for Rameshwar Nath)...


Now, just see the emphasis on the fact that Kao was a Kashmiri Brahmin. What's the need to mention the caste? Nehru is ideologically their opponent, so his caste is not described (which every one knows). In fact, it tells that Kao was so sharp, that Nehru had to handpick him.

Anyway, go further. The author, Mallika Nawal, who is described as, "a professor-cum-author, about to complete her doctorate in marketing from IIT Kharagpur", goes on to quote none other than Manu, the 'man' who created the most despicable varna system in the world.


According to the Laws of Manu, “the king—with the help of spies—must collect intelligence pertaining to his own kingdom as well as enemy kingdoms’....[then Chanakya is quoted]...

The article doesn't tell you Morarji Desai's caste. After all, the article portrays him as the villain of the country. So when Kao went on to demolish Pakistan's nuclear programme (no he didn't, still, there is need to put  him on higher pedestal and describe his Brahmin qualities), can be eulogised for his caste, why not talk of Desai.

Call him, a Gujarati Brahmin (or whatever you wish to call him) who screwed up? No, there is not a word about his caste. It doesn't even tell us how Janata Party government was propped up by the Rashtriya Swayamsevak Sangh (RSS), the supremacist Brahmins' brains.

That's the 'caste-less', modern, society and the thinking 'Swarajya' magazine and its authors, put forward. If the author didn't find anything wrong, at least, the editors or sub-editors could have rectified it, but no one seems to have a problem with this casteist bull-shit.

Perhaps, the writer and the sub-editors didn't even find anything wrong with it. That's how 'caste' is, deeply engrained within you. Those claiming to be against the caste system and as 'anti-caste' are the most ardent casteists themselves.

[Screenshots saved, in case they change the lines later]

*About Swarajya magazine and their editorial policy Link and Link
Posted by editor at 2:42 PM