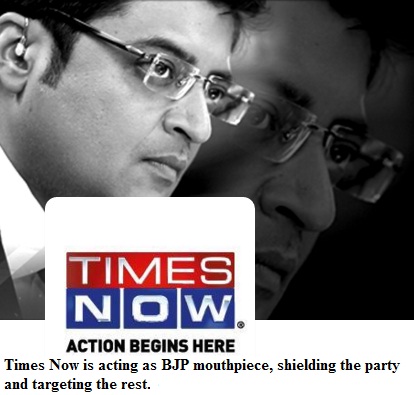 Ashraf was invited to the channel for a debate, however, Goswami cast aspersions on him when the former began putting across his point.

The journalist who works with Tehelka had questioned authenticity of the a video purportedly released by ISIS.

The video showed a suspect in it, who is liked to Batla House encounter.

However, the moment he expressed his suspicion, Goswami began lashing out at him.

He went on to term Ashraf as an Indian Mujahideen sympathiser. Other panelists too launched an attack on him. Ashraf's microphone was allegedly switched off and Goswami accused him of being a terror sympathiser.

But leading writers, journalists and activists have supported Ashraf. Goswami has lately been accused of pro-Hindutva leanings and of not allowing people with a different point of view to speak in the debates.

He has also been accused of misbehaviour with panelists. Congress leaders have boycotted the Prime Time on Times Now.

Also, many leading intellectuals, writers and academicians have expressed concern over the manner in which the show is conducted.

Panelists are not allowed to speak, if they are opposing Goswami's point of view and the narrative he wishes to propagate. Now, Ashraf intends to send a legal notice to Times Now.