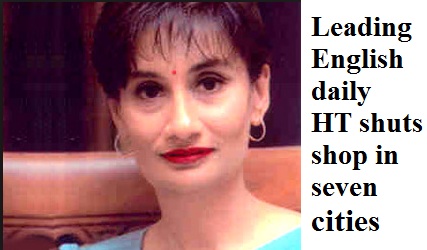 For Indian media, nothing could have been as bad as this news at the beginning of the New Year.

They include four editions and three small sub-editions in North India.

The decision is not only a big blow to journalism and journalists but also affects the media industry in the long run.

Kolkata, Bhopal, Indore, Ranchi are the editions that are being closed. Three other small editions including Kanpur and Allahabad are being shut.

Reports suggest that more editions could be closed soon. The decision will affect the prestige of the premier media organisation. In an era when journalists are finding it tough to get jobs and lay-offs are common, a media company that was in profit, is closing editions.

This will have a devastating effect on other smaller media groups. No one has clear idea as to why the editions, many of which were nearly 15-20 years old, are being shut suddenly.

This will also affect the image of Shobhana Bhartia, daughter of late KK Birla. She is the executive director of the Hindustan Times group. With hundreds of persons set to lose their jobs and established editions dying, it is nothing less than a taint.
Posted by editor at 11:58 AM