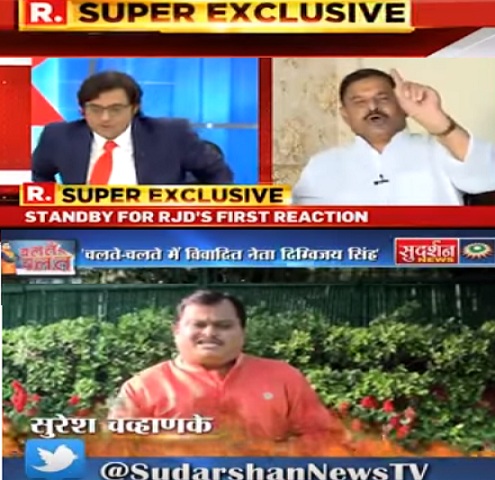 From the very first day, it is clear that the channel aims to to be the English version of rabid right-wing Hindi channel Sudarshan TV.

In fact, Goswami's ideological slant is known for a longtime.

Known for his right-wing agenda, he had created his own signature style--not allowing guests to speak and shouting, humiliating others in the studio.

The high-decible debates and shouts brought him TRP.

Initially, he tookup coal scam and corruption in commonwealth games,

But later when BJP government came to power, he stopped attacking government and instead began targeting opposition. University and college students were targeted, defamed and made enemy in the eyes of nation.

Finally, he was made to leave the channel. With the backing of BJP leader, he has now started Republic. Clearly, the fight is between TimesNow and Republic as to which will pursues the extreme right-wing agenda with more ferocity.
Posted by editor at 1:53 AM