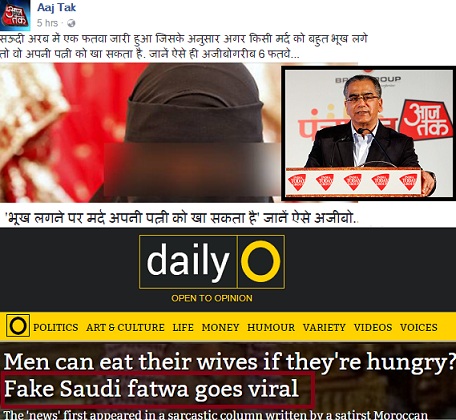 Today it is reduced to spreading fake stories and propagating falsehoods.

Imagine, the level to which the journalistic standards of this group has fallen--Aaj Tak carries the false story about a Saudi mufti's purported fatwa that a man can eat  his wife or her body parts.

It was a satirical take in a magazine and when it was picked up by mainstream media's online sites, it was refuted.

The government and the mufti also came out and said that it was absolutely wrong.

In fact, even the India Today group's DailyO had long back published that it was a false report. LINK. Still, Aaj Tak carried it once again. Aajtak's website gets hits in millions.

Also, Aaj Tak has millions of followers on Facebook. That, a supposedly mainstream newspaper can go to such level just to garner 'hits', is shocking. It tells you about the situation of journalism and journalists in 21st century India.

Hope, Aroon Purie and his management realises that they have hired people who can't distinguish between rumours and news. That, people who don't understand the sanctity of the written word, need to be ousted from the profession.

Else, it is doomed. Once credibility is hit, it is very difficult to restore it. Time for Aaj Tak-India Today to take a decision. Aaj Tak should apologise and acknowledge that it made a mistake. That's the least it can do.
Posted by editor at 6:41 AM