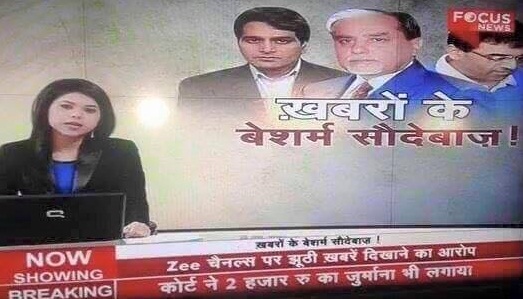 It should be a cause of worry for Subhash Chandra that his TV channel has not only lost its credibility but has become 'news' for all the wrong reasons.

Media houses are known for their slants and their tilt towards political parties.

But over the years Zee News' excessively biased reporting and the jingoist rhetoric has turned it into a joke. Rajat Sharma's India TV is also known for its leanings but Zee News has become a propaganda machine.

From its anchors' involvement in extortion to the channel's attempt to defame JNU students by telecasting doctored clips, the channel's reporting has gone from bad to worse. In fact, it is giving serious competition to Sudarshan News, these days.

Zee network was India's first private TV channel that was launched more than two decades ago.
It should bother Chandra that the channel has suffered incalculable harm. Unfortunately, a Rajya Sabha nomination was enough for Chandra to abandon all ethics of journalism.

The photograph accompanying this report shows a programme that was aired on Focus TV. It terms Zee news owner and anchors as 'Khabron ke besharm saudebaz' i.e. 'Shameless brokers of journalism'.

Will Chandra wake up? It's already too late for him and his channel.
Posted by editor at 11:34 AM