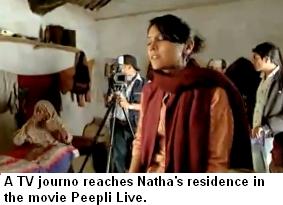 Recent Bollywood movie Peepli Live has taken a dig at journalists, in fact, electronic media, for its sensationalism and skewed vision.

In recent months, many movies including Rann and Tere Bin Laden made fun of the reporters and TV channels. But the Amir Khan productions' movie should serve an eye-opener for the journalists' tribe.

After the protagonist Natha who has announced that he would commit suicide, goes missing, the journalists look for his footprint and even the spot where he last went to attend nature's call.
Further, the movie shows a journo speaking on camera, informing viewers that the colour of excreta can tell a person's psychological state and goes on to describe even more. Everybody didn't find it hilarious or funny as some journalists felt it went too far and made them a laughing stock.
Journalists argue that serious reporting and hard news analysis don't get as much TRP (ratings) as a story on the secret behind Salman Khan's black specs, a haunted house or a vengeful naagin. They claim that they show what the viewers want and there's some merit in this argument.
Eyeballs are important and after Rajat Sharma's India TV, other channels also took to Bollywood gossip, ghosts, trivia about celebrities & all sort of nonsense to get TRPs. The fact is that there are innumerable cases but only Jessica Lall's case gets highlighted or the Arushi murder mystery, and other stories aren't chased.
It is perhaps because they happen in metropolitan city. If media takes up the case of Ruchika Gehrotra, the teenager who committed suicide, when a former DGP molested her and later harassed her family, society should also respond.
In hundreds of other such cases, neither the local officials get alerted, nor the society become vigilant. In Ruchika's case, High Court refused bail and took a serious view of the ex-cop's past conduct. Shouldn't this happen in similar cases elsewhere.
The trouble is that our bureaucracy and more so, the society don't react either. Such stories should alarm citizens and NGOs to ensure that injustice doesn't happen. However, our society remains largely apathetic when a Dalit or a poor girl is raped in a rural area. It reacts when someone 'like us' is at the receiving end.
However, media persons need not get offended. The movie is a black comedy. It makes fun of the politician as well as the government official. Anusha Rizvi's film shows the widening rich-poor divide and the ever growing urban-rural disconnect.
But yes, we should take the criticism in the right spirit. TV reporters and anchors may learn to work on their language and grow beyond the 'Aapko kaisa lag raha hai' question which is darted by journos irrespective of the situation.
Posted by editor at 2:30 PM

here is some light stuff. Please have some sportsmanship!