Indian Media must answer the charges of anti-Dalit/Buddhist bias 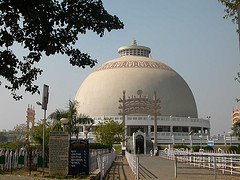 On October 2, an estimated 20 lakh Dalit Buddhists came to the Deeksha Bhoomi in Nagpur to have a glimpse of the casket containing Dr BR Ambedkar's ashes kept in the Stupa here.

Buddhist scholars, followers of Buddhism from Japan and other Eastern countries, the British and other White Buddhists all congregated in Nagpur for the 50th year of Dhamma revolution.

'Sadly enough, Indian television, which scours for stories to pack each minute of air time, lost the golden opportunity to bring this unique event into the public domain. It did not report a minute of it. Is it a case of marked indifference?', asks Raja Sekhar Vundru on the Editorial Page of Times of India on October 14.

Very genuine question. Every year Deeksha Bhoomi witnesses lakhs, but this event is not covered. Is Indian media casteist, anti-Dalit and treats Buddha as untouchable, as the writer puts up. Media does show stories of little journalistic value but turning a blind eye towards such major events is clearly something, it needs to answer.
Posted by editor at 1:27 PM