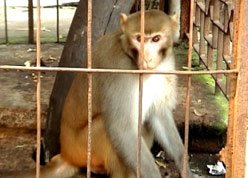 Story of the Communal Monkey

HT reports that it was a monkey raised by a Muslim who used to bite Hindus. The paper terms it as a Jehadi monkey (for biting Hindus). Though HT site doesn't carry archives for long, this particular report is available Click to Read

CNN IBN reports that it was raised by a Hindu and used to bite Muslims. The report says Hindu monkey bites Muslim kid. Read it Here. (I have appropriately coloured text of both reports)
Now which report is correct? Both stories come from Orissa. Seems it was a monkey raised by Muslim as many other reports support that version. Then how Rajdeep Sardesai's channel got bitten? It seems just on the basis of paper cuttings it was reported in CNN IBN. After all, mostly it is local papers that print and the reports are later flashed in national media.

At least, NDTV stayed away from this monkey business and the report is straight. No Hindu or Muslim affiliation and just facts about a 'natkhat' bandar. Read
Posted by editor at 3:17 PM