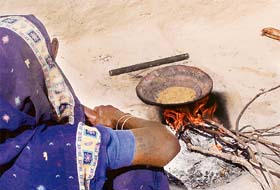 Hindustan Times carried a series of stories on the drought in Bundelkhand region of Uttar Pradesh. The story of families eating 'ghaas roti' (grass roti) as they have no grains to eat, has been indeed shocking.

On one hand Vidarbha remains in the news, hundreds of suicides in Bundelkhand have gone unnoticed. The stories by Pankaj Jaiswal for the Lucknow edition about starvation deaths and entire villages that have no soul left due to successive droughts, needed a better display in national edition and a coverage in other newspapers also. Sadly other papers have failed to pick up the distubring trend.

Photo: A woman cooking a ghaas roti.
Posted by editor at 8:45 AM

Hyderabad based urdu newspaper siasat editor mr amir ali khan and mr mazhar and mr alamdar were involved in a sex racket today as exposed by MIM floor leader in the state assembly in which a young girl was sold to alleged sex racket after being brought in a trap by offering her a scholarship and then taking her to a farmhouse and raping her which are seirous offenses and even forcing her parents not to file a police complaint and threatnig them with dire consequences.Even the National Law Trust has sent a letter dated on 14-09-2006 signed by its Chairman Mr Khalid Nishu to all the Newspaper editors to take up the story as it damages the reputation of the media and the victim Mrs Mariam Fatima had even met the President of India seeking justice and the State Home Minister has appointed a team led by deputy Commissoner of police Mr Madhu Sudan Reddy IPS to investigate the case as promised by the Minister in the Assembly .The Majlis Ittehadul Muslimeen on Tuesday took the Congress government to task for its alleged failure to control kidnappings and trafficking of young girls in the State, particularly Hyderabad.