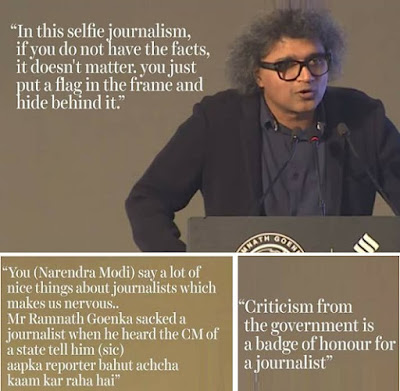 Prime Minister Narendra Modi got lessons in journalistic ethics and values at a function in Delhi.

The event was organised to give away the Ramnath Goenka awards for excellence in journalism.

While audiences applauded Jha over his speech, PM Modi was cold and expressionless.

"Criticism from the government is a badge of honour for a journalist", he said.

Jha, in his vote of thanks said, "You (PM) also said a few wonderful things about journalists that makes us a little nervous....we have a generation of journalists who are growing up in an age of retweets and likes.."

The speech was applauded among journalists as Jha spoke with conviction. Just when NDTV has been banned for a day, Kashmir Reader has been shut down and journalists who question government are being branded 'anti-national', Jha's journalism class was needed.