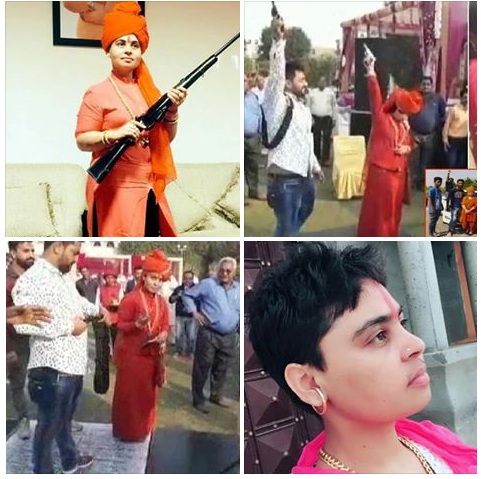 Sadhvi Deva Thakur who is known for her firebrand speeches is now facing murder charges.

In a marriage function in Haryana, she began firing and this led to a woman's death.

Deva Thakur is now on the run. She has a murder case registered against her.

The Sadhvi, who is a Hindu Mahasabha leader, is known for her inflammatory speeches.

The latest incident has occurred in Karnal in Haryana.

She was invited to the marriage ceremony. She began firing and a gunshot caused the death.

A girl was also injured in the firing. Deva Thakur and half-a-dozen others who accompanied her, had been armed. The marriage function hall owner said that he had informed police as soon as firing began, as this is not allowed.

Deva Thakur had earlier caused controversy when she suggested that Muslims and Christians should be made to undergo sterilisation. She had also said that Hindu idols should be kept in mosques and churches.

Indian Express report
Posted by editor at 10:41 AM