Jorunalist Vs Activist: Throwing shoes is not journalism 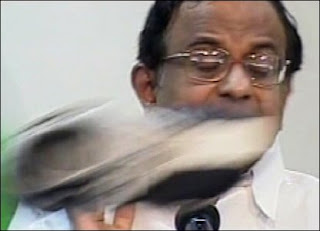 When a Sikh journalist threw a shoe at Indian Home Minister P Chidambaram, the reactions varied. However, the worrying issue is that there was not enough condemnation of the action in media.

It is true that the act did help in delayed action against Jagdish Tytler and Sajjan Kumar. The anger among Sikhs community against these persons who were accused of involvement in the killings of 3,000 Sikhs in Delhi, is justified.

It is a dangerous trend. Once you are a journalist and you are covering an event, you ought to forget your association with your caste or community. Tomorrow a journalist may wear any identity on his sleeve.

He may become a Muslim and the target of shoe-gate could be a BJP leader or a North Indian journalist may hit a Shiv Sena leader for campaign against migrants from UP and Bihar (or a Tamil Nadu politician for support to LTTE).

A Dalit journalist may hit an Upper Caste person or vice versa. Yes, it grabs attention but it is an unhealthy trend. Congress MP Naveen Jindal is the latest as he was hit in Kurukshetra when Ram Pal, a retired teacher hurled his shoe at the MP.

It had started with Muntadir Al-Zaidi, the Iraqi journalist, who threw his shoe at George Bush. He missed the target and again took off the other shoe to hit at Bush which the then US Prez ducked. Now the trend is catching on in India.

Ideally a scribe must respond as a reporter, with his pen. He should ask tough questions but must not act irresponsibly. He is privileged to meet the high and mighty as an unbiased representative of the citizens and society.
Posted by editor at 11:20 AM

even otherwise we have so much trouble with the security mechanism. journos do get frisked at times roughly and now this would only lead to situation where they would be asked to walk barefoot...but then maybe someone will through a pen?...then maybe we will have a video conference as the future!

In enlightened Kerala, CPM activists that strike or agitate throw not chappals or shoes on enemies; but nightsoil.

NGOs and teachers regularly use it on blacklegs and other unions. A State Human Rights Commission member took some action against some CPM civil servants and found his entire house painted with human excreta.

Kerala joutnalists beaten up frequently by CPM cadres only march the streets to Police Stations in protest now. Before long they might also start throwing. They might use Kerala's favourite throwing material.