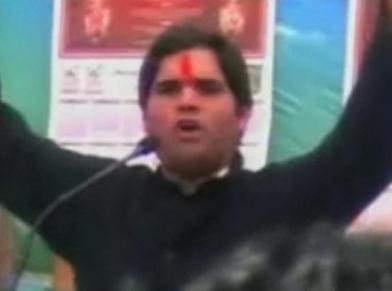 Even after reading the mainstream newspapers, many readers were left wondering that what Varun Gandhi had exactly said in his communal and provocative speech at an election rally in Pilibhit?

The situation arose because strangley most of newspapers didn't report the offensive parts of the speech. Rather, the less provocative part was mentioned in the newspapers.

Take the example of Hindustan Times. It mentioned that Varun said if anyone raises a finger at Hindus then I swear on Gita that I will cut the hand. But this is the least of provocative part from his speech.

Even if the correspondents had seen the video footage on any of the channels, they could have realised that Varun had said lot more. The speech was inflammatory because he allegedly used the word 'katua' (circumcised) for Muslims and vowed to kill them.

On murder, rape and cowslaughter
The words could have been replaced by asterixes but the newspapers didn't report this at all, leaving the readers perplexed. Even the next day, HT's senior journalist Shekhar Iyer who covers the BJP beat reported the same sentence without mentioning the inflammatory lines about Muslims and wild charges about rapes of Hindu girls and cowslaughter or the comment regarding Pakistan.

The Times of India was no better. The Hindu was an exception. One reason was that print journalists didn't bother to watch the barely 2.36 minute video clip available on the internet and websites of other news channels. There is another reason.

As a result the readers who hadn't watched the video on TV channels, couldn't understand why the speech was considered so offensive that everybody was gunning for Gandhi junior and asking for his arrest.
Posted by editor at 12:10 PM

Excellent blog.In the storm of life we struggle through myriads of stimuli of pressure, stress, and muti-problems that seek for a solution and answer. We are so suppressed by the routine of this every life style that most of us seem helpless. However, if we look closely to ancient techniques we shall discover the magnificent way to understand and realize the ones around us and mostly ourselves. If only we could stop for a moment and allow this to happen. May all beings be happy (Loka Samastha Sukhino Bhavanthu)

The Holy Gita is the essence of the Vedas, Upanishads. It is a universal scripture applicable to people of all temperaments and for all times. It is a book with sublime thoughts and practical instructions on Yoga, Devotion, Vedanta and Action. It is profound in thought and sublime in heights of vision. It brings peace and solace to souls that are afflicted by the three fires of mortal existence, namely, afflictions caused by one's own body (disease etc), those caused by beings around one ( e.g. wild animals, snakes etc.), and those caused by the gods (natural disasters, earth-quakes, floods etc).

Email Marketing
veyr handy, thanx a lot for this blog ..... This is what I was looking for.