Selling Editorial Space: News Up for Sale in Indian Media 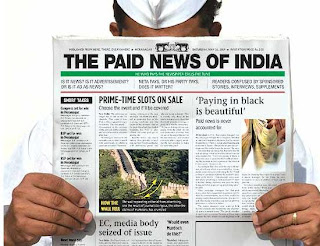 Someone had to write it someday and the weekly Outlook has finally brought up the subject, with a cover story on the unethical side of the news business.

The dirty practice of paid and sponsored content in Indian media has reached a point where the ethos of journalism are under threat.

Even advertorials have become a thing of past, as news content is bought and sold openly. First Times of India began selling editorial space and published paid reports as news. Now almost all the major newspaper groups are bargaining for packages during election campaigns.

In Hindi and vernacular newspapers, the malaise has spread fast. All political parties, leaders and candidates are approahed. If they pay up, the campaigns are given coverage and news stories are planted, suggesting that they are winning or the voter is wholeheartedly with the candidate. Else, the contestant is blacked out.

Ironically, bigwigs in media and the toothless Press Council remain mute specatators to this dirty practice, which is now a multi-million industry in every major state capital in North India, either it is civic and assembly poll or the parliament elections.

Will the Outlook story shame the media barons! Read the article by Anuradha Raman, 'News you can abuse' online in the issue titled 'FOR SALE JOURNALISM', that also has articles by Vinod Mehta and Neelabh Mishra.
Posted by editor at 1:57 PM

Tarun Shukla working in Mint Newspaper Delhi should read this. Maybe this will stop him from selling his soul (editorial space) for Rs.50,000 a piece. Special rate of Rs. 200,000 to finish someone by writing a series of negative stories. Shame to Indian journalism !!!