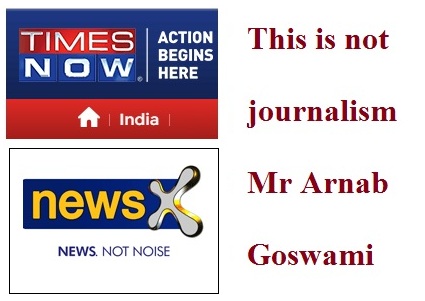 It started soon after the BJP came to power. Times Now, the leading English news channels, was quite harsh on establishment.

The channel's face, Arnab Goswami, took on Lalit Modi, but soon it became clear that strings had been pulled and Goswami was no longer shouting.

He was shouting but was no longer attacking the ruling party. This was a clear shift from the past when he attacked UPA regime.

But that was just the beginning. Just like Congress, BJP also has its share of 'bad guys'. But Times Now was no longer raising issues that would show BJP leaders in poor light. The constant target was Congress, once again.

So, either it was Sohrabuddin case or Ishrat Jahan fake encounter, Arnab Goswami was now giving twist to each and every story, in such a way that he ended being on the side of the BJP, saving and 'exonerating' the BJP leaders, while defaming and denouncing others.

It got so ugly that TV anchors were falling on the feet of the ruling party leaders to show how much subservient they are to the party.

They never asked tough questions as to how Maya Kodnani who was sentenced to double life imprisonment for inciting mob to murder innocent women and children, was out of jail on parole in Gujarat.

They didn't question how Babu Bajrangi was suddenly out of jail too. But the worst was yet to come. Goswami's channel now goes all out batting for Hindutva extremists.

The right-wing Hindutva terror network had been busted by ATS under Hemant Karkare, the brave-heart officer who was killed in Mumbai terror attack.

The role of the then ATS officer KP Raghuvanshi was not up to the mark. In fact, he faced allegations of being slow in pursuing these cases.

But Times Now goes to the extent of giving legitimacy to Raghuvanshi, who was accused of botching up investigation in Malegaon and similar other cases.

While blaming BJP or Congress is okay, it is sad to see how Goswami has become a mouthpiece for the RSS, and seems to be driven with a single agenda that is to help the Saffron terrorists' case in all these trials.

This is possible by either creating confusion or spreading misinformation. Times Now is exactly doing this and this is criminal to say the least.

It is shameful to see India's leading English news channel spreading canards and doing disservice to the nation.

Late Hemant Karkare had painstakingly bust the network and cracked the cases. The result was arrest of Sadhvi Pragya Thakur, Lt Col Srikant Purohit, Dayanand Pandey, Samir Kulkarni and many other members of the right-wing extremists' gang.

But, TV channels like Times Now and News X are taking a line that is not just unethical but also shows how journalists have simply become tools to manipulate the opinion and tinker with cases, at the behest of the political masters.
Posted by editor at 11:54 AM