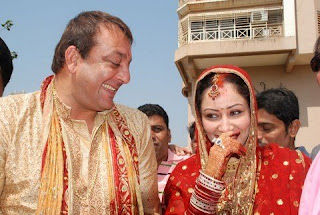 How news channels love to invent stories and then create hysteria is not a new thing in Indian media. Hours are wasted over the ongoing controversy surrounding late Sunil Dutt's son and daughter.

Even NDTV India, a comparatively sobre channel gave unusual airtime to it. Specially, it took cudgels on behalf of Congress MP Priya Dutt. Firstly, Sanjay Dutt is an adult and it his prerogative to fight election on the ticket of any party.

When his sister Priya objected and criticised the step, it became news. However, Sanjay Dutt must have felt infuriated and he suggested that she had no reason to poke her nose in their matters.

His indication that the Dutt surname belonged to the couple, is now blown out of proprotions and the channel appears ganging up against him and trying to unite women to speak against Dutt for his male chauvinism.

Of course, it is the inaliebale right of any man or woman to to retain their earlier surname after marriage or even discard it. The problem is that it is basically Priya's dislike for Manyata, which is quite evident, and is at the root of the problem.

When Sanjay married Manyata, his sisters didn't accept the marriage. It was his choice to marry her. Now she is playing an important role in Sanjay's life, which Priya seems unable to digest. The troube is that Priya and his sister Namrata appear biased against Manyata because she was a 'mere item girl' and not a star.

Why this 'class bias' is not being talked about? The daughters of Dutt household aren't comfortable with a girl who isn't as 'sophisticated or stylish' and feel that they have to cut a sorry figure because their brother went a step down to marry Manayata.

Isn't this insulting for Indian women? NDTV that is quite vocal on 'surname' controversy, should first focus on this issue. After all, why Priya doesn't approve of Manyata, and treat her as daughter-in-law of Sunil Dutt's household.

Is a person approved just because of his/her social status? These double standards also need to be exposed.
Posted by editor at 1:26 AM